There is no way to deny the cultural shock induced by the 2020 Minneapolis uprising against police brutality. It was felt throughout the cultural landscape and in particular in the dance music industry, with an increased focus on featuring Black artists in the press.

Yet, this increased awareness for the Black struggle within the context of the dance music industry has not translated into structural changes throughout the industry. Instead, we are faced with the rise of very performative representation politics, which are concomitant with a structural form of idolatry of DJs which trumps the interests of club workers.

To collect the data, we analyzed event pages on ra.co, filtering each date from January 1, 2020 through December 31, 2021, for a selected list of locations. Then, we parsed the details of the events listed for every single date, in order to filter the search. Data cleaning included removing events with any variation of "canceled" in the title, and excluding duplicate listings, which were identified by matching event URLs. Our dataset spans over 45,000 promoted events.

The data set is based on locations spanned across the 27 countries in the EU, with the exception of Austria, and with the addition of Australia, England, Scotland, and the US. For some countries, event searches on RA's website can be filtered by subregions; in these cases, we looked at either the capital city alone (e.g. Helsinki) or the top metropolitan regions for clubbing events (e.g. Paris and Marseille).

For context, we collected data on the Black population of several countries. Namely: Germany[2] https://www.focus.de/wissen/mensch/sprache/es-gibt-einige-die-entsetzt-waren-zu-besuch-in-neger-und-mohrenkirch-koennen-ortsnamen-rassistisch-sein_id_12824108.html France[3]Inaccurate estimates since race-based census have been outlawed in France. Nonetheless, those numbers are widely accepted as an underestimation of France’s population. … Continue reading, Spain[4]https://www.ine.es/jaxi/Datos.htm?path=/t20/e245/p08/l0/&file=01006.px, Netherlands[5]https://opendata.cbs.nl/statline/#/CBS/en/dataset/37325eng/table?ts=1577855153711, Italy[6]http://demo.istat.it/str2018/index.html the UK[7]https://www.ons.gov.uk/peoplepopulationandcommunity/populationandmigration/populationestimates/bulletins/annualmidyearpopulationestimates/mid2020

We work under the assumption that the Black population in European countries is more or less concentrated in large cities and metropoles, which are also the places where club scenes are thriving. Nonetheless, it is worth noting that about 13% of London’s population identifies as Black according to the UK census, while the US census reports 9.62% for LA, 19.24% for Miami, and 15.9% for NYC.

Analyzing the data that we collected, we observe a significant spike of bookings of Black artists in the US and in France in June, during the peak of the 2020 Minneapolis racial uprising, which echoed in France with protests all over the country. It is worth noting that this spike did not translate into a better representation of Black artists. For France specifically, Black artists have been less represented since the Minneapolis racial uprising, in spite of the fact that France has the largest Black population in Europe.

Moreover, the slight increase in representation of Black artists, between June 2020 and June 2021, coincides with a significant drop of the number of events taking place, over the same period. This seems to suggest that Black artists were more likely to appear on line-ups when covid-related risks were very high.

There is a noticeable spike in the UK and in France in February 2021, the first Black History Month post-Minneapolis uprising, in spite of the fact that Black History Month is celebrated in the UK (and in the Netherlands) in October. [8] It is worth noting that France does not have an official Black History Month, with the celebration of Afrodescendants concentrated in/around May 10th, the French national day which celebrates … Continue reading This seems to suggest that European promoters operate in a very US-centric frame of reference when it comes to performative representation of Black artists. 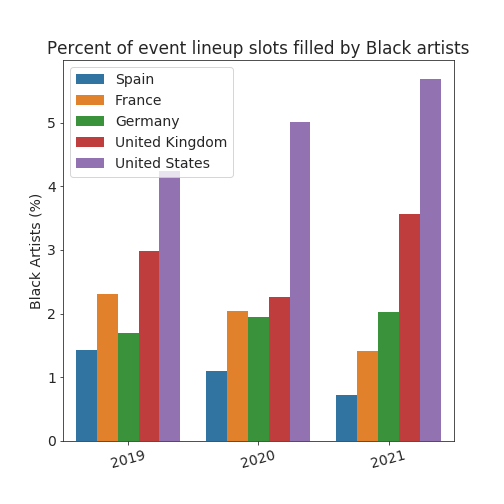 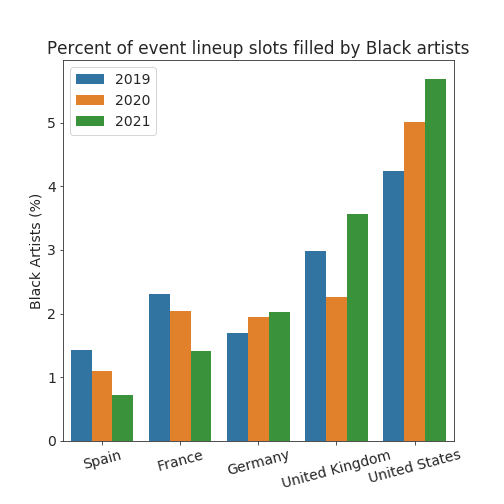 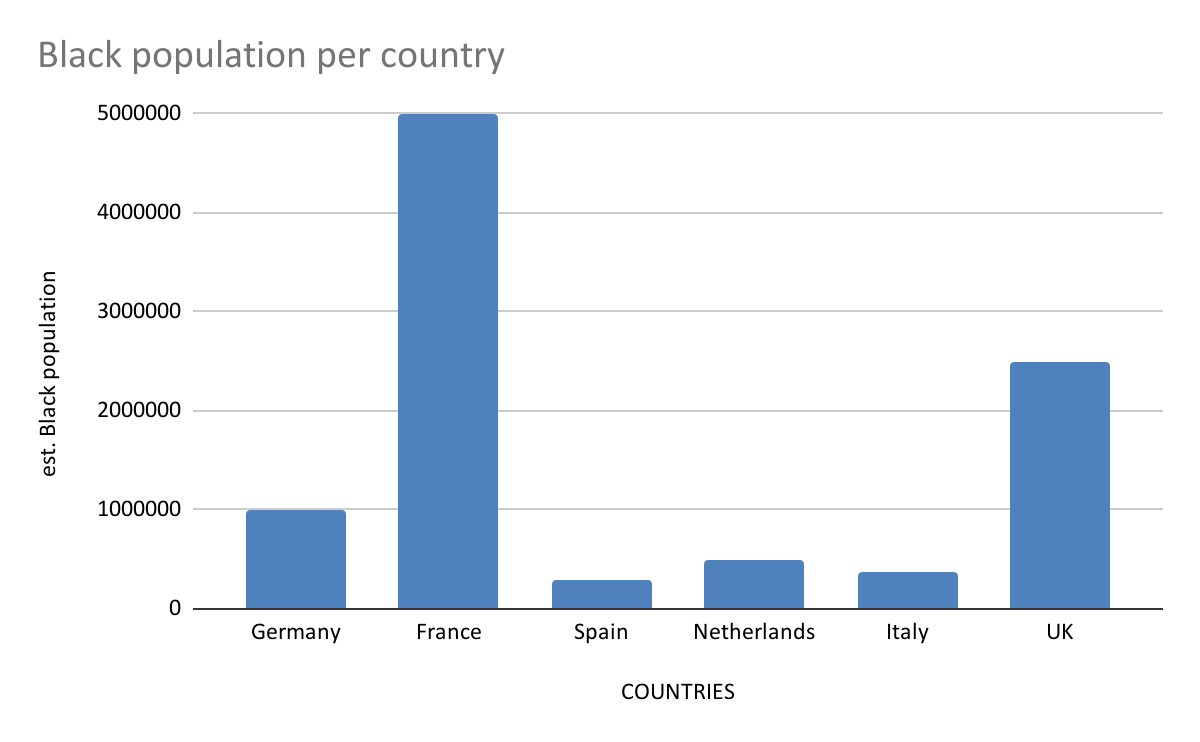 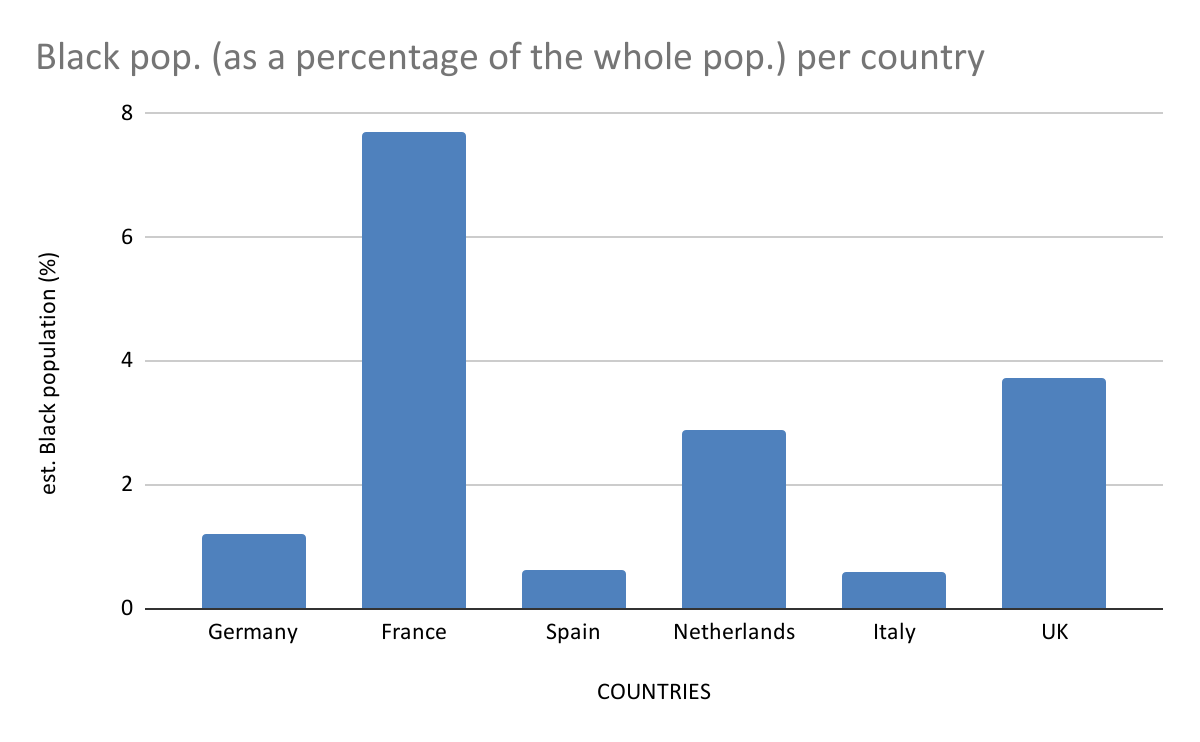 Moreover, the conclusions about Feb 2021 were based on really limited data, only a handful of events for France and the UK. In comparison, the US had around 30 events with lineup info that month, and there was no spike in representation of Black artists. So we can’t support the interpretation that there was a Black History Month-related spike in representation.

Stay in the loop